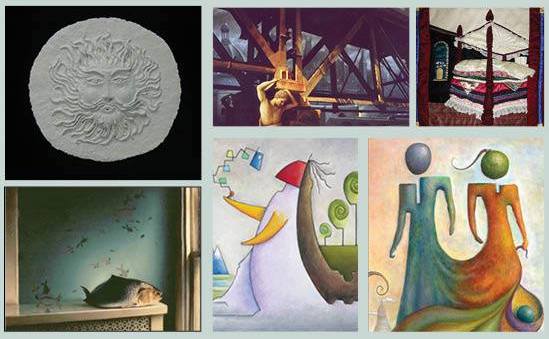 The Liriodendron is excited to exhibit the works of three eclectic artists, along with additional pop-up artists.

Craig Haupt is largely self-taught. Combining a long career of drafting skills with selected sketchbook doodles, he has been creating a menagerie of whimsical subjects. He now works primarily with oils, but still continues to produce numerous images with watercolor and pen & ink.

A graduate of Towson University, Craig has exhibited in various locations throughout Maryland, and in Brooklyn, NY.

“Visual Arts has been a series of ebb & flows throughout my life. During 1995, the strongest flow washed over me and has sustained to this day,” says the artist.

Terri Slack Hardwicke is a multi-media artist who is also one of the Gallery Directors at the Liriodendron. She creates whimsical pieces out of up-cycled furniture, glassware, and other items.

Christopher Winslow is a painter who had his early education in California and Papua New Guinea (1971 to 1975) and at the  Dun Laoghaire College of Art, Republic of Ireland (1976 to 1980.)

Thirty years ago, he settled in Maryland and began his career as a decorative painter.

“Over the years I have had the good fortune to be able to focus on privately commissioned paintings, portraits, and murals. In my commercial work I paint in many styles and replicate different periods of art, depending on what the interior designer or client wants. This has given me a great opportunity to explore and combine many genres of art and design, creating a new and fresh look.”